The world lost an exuberant force of nature, a champion for justice, a loyal friend and ally, and a powerhouse of FUN when Psarah Alice Johnson was unfairly taken from us on April 29, 2022.

Psarah was born in Salt Lake City on May 16, 1976 to Julie (Bob) Mayhew and Kermit Johnson. Diagnosed at 18 months with Juvenile Rheumatoid Arthritis, Psarah overcame a lifetime of multiple health challenges with style, sass, and an irreverent sense of humor. She underwent eight joint replacement surgeries, while collecting several autoimmune disorders. She faced down breast cancer during the pandemic, only to be struck with a leaky heart valve and a stroke. She was recovering well from the stroke and happily on her way to rehab, determined to prevail, but her body would not cooperate and a second stroke proved to be too much.

Psarah graduated from the University of Arizona in 1999 with a BA in Psychology. During her college years she channeled her wicked sense of humor into “The Charles Darwin Experience” improvisational comedy troupe. Her quick wit and sparkling stage presence generated the biggest laughs, often overpowering the loud, rowdy young men who typically dominate the field of improv comedy.

Despite her 90 pound 5’3″ stature, she had the confidence and demeanor to score the unlikely position of Head of Security at the on-campus concert venue. Her powerful attitude was enough to regulate patrons and maintain crowd control. After graduating, she worked in a group home for troubled teens, taught as a substitute teacher, and at one point “ran away to join the circus” where she was Master of Ceremonies for a traveling side show.

For the next seven years she taught Utah Studies and built the theater program at Kennedy Junior High. She had a talent for bringing out the best in a person and helped her students overcome shyness and find their voice. She gave the opportunity to shine to students who might otherwise have been overlooked, instilling confidence and teaching self-acceptance and empowerment.

Psarah served as board chair of the Disability Rights Action Committee (DRAC); was a volunteer for Rock Camp for Girls; fronted the punk rock band “F*** the Patriarchy; and was a regular volunteer for KRCL radio. As a theater professional she created “Matchstick Theory,” a one-woman show highlighting the intimate struggles of chronic illness.

She organized and attended countless rallies and political actions, often putting her body on the front lines where she risked injury and faced arrest. She was a fierce activist against any type of injustice and an unrelenting advocate for marginalized people everywhere. She called out ableism, racism, and sexism and showed up always and everywhere, not only for disabled people, but the BIPOC community, the LGBTQ+ community, the immigrant community, underprivileged students, and anyone who felt beaten down by societal standards. Drawing on her punk rock attitude, whip smart sass, and kick-ass spirit, she fought on The Hill, on the streets, on the radio, on TV, in the papers, and – if you deserved it – she was “in your face.”

Yes, she burned with the fire of a thousand suns, but she had one of the kindest hearts you could ever know. Psarah had more people who called her “best friend” than many others have acquaintances. She was always game to get together, despite being trapped in a body that had been failing her spectacularly since childhood. She inspired people to live life unapologetically, to be there for friends, even when it was hard, and she insisted on FUN – it just wasn’t an option. She was delightfully mischievous with a flair for the goofy. Her exuberance and sincere joy for life were infectious. She was our Rebel Girl and the Queen of our world and we’ll miss her more than we can say. 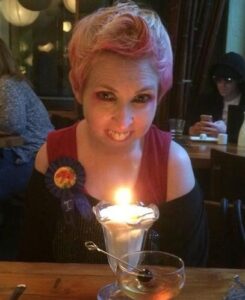 Psarah is survived by her husband, Brian VanDevener, parents, Julie and Bob Mayhew, brother G. Aaron (Miriam) Johnson, and sisters Jennifer (Todd) Leyva and Melanie Mayhew, as well as her extended family, her doted-upon hoard of “nieces and nephews,” her former students, and the thousands of friends whose lives she touched.

Psarah’s Celebration of Life Memorial will be held Saturday June 25th at 4:00 pm at The Alliance Theater in Trolley Square. Out of respect for the safety of her health compromised friends, masks will be required. In lieu of flowers, please give your time or a donation, in her name, to a cause that’s important to you. She cared about so many different ones. And most importantly, vote – and vote blue.