I was at a one year old’s birthday party when it happened; a moment of perfect truth.  She’d been watching me since my husband and I had arrived at the party.  She couldn’t have been more than four or five and had the natural inquisitiveness that comes with children of that age.  She slowly sidled closer and closer until…

My eyes lit up and a smile spread across my face.

“It’s your arms,” was her confident reply.  “They’re like this.”  She quickly mimicked the sharp angles at my wrists and elbows.

“That’s a very good T Rex!” I said and with a roar we took off into a full scale dinosaur battle.

For the rest of the night she studied me as a biologist might study a new species.

“Catch this,” she’d say, throwing me a ball.  I’d catch it in the crook of my arms, my arthritic fingers lacking the dexterity to properly grip a ball.  She continued her experiment with a number of requests.  “Hold this glass.”  “Pick me up.”  At no point did she judge my ability or inability to perform these tasks in the “correct” manner.  She just observed HOW I did these things.  It wasn’t good.  It wasn’t bad.  It was just different.

There have been times in my life when I would not have embraced this comparison.  Growing up with arthritis, my biggest and only insecurity were my arms.  I idolized the Venus de Milo for her lack of arms and did everything I could to hide my own.

By college I had figured out I should embrace my arms and stop trying to hide them.  I found new idols in the form of squirrels, raccoons, and meerkats.  But it wasn’t until I found T Rex that I could fully relate.  T Rex was strong.  T Rex was powerful.  T Rex was king and when he got knocked down he got pissed.

I remember a time in high school when some kid tripped me to be funny.  I flipped over on my back and started kicking the shit out of him.  When someone managed to pull me away and help me up I stormed off slamming the door hard enough to shatter the glass.  Yup.  I had found my spirit guide.  T Rex and I are now bonded for life and have been for about twenty years now. 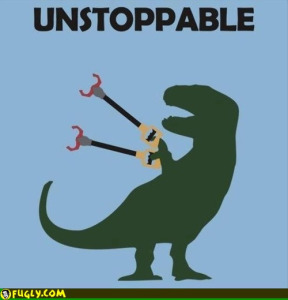